The 2004 election was a bitter sweet victory for final winner Victor Yuschenko, the pro West candidate that wanted to bring Ukraine into the EU, WTO and NATO. About one month prior to the election he was poisoned with a heavy dose of dioxin (agent orange), Doctors in Vienna estimated he had absorbed 5,000 times more dioxin than anyone known in history. 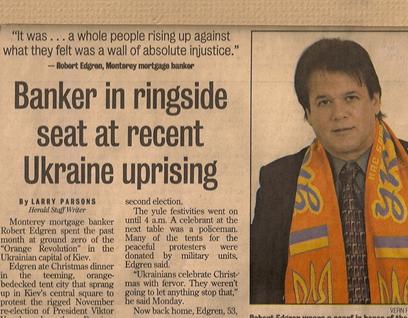 Accurate and Professional News of Ukraine 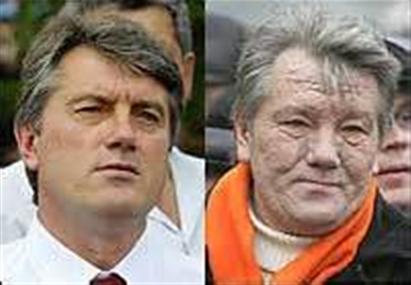 The current news coverage on the recent activities in Ukraine, Russia, and Crimea by and large have been a lot of assumption, guesswork, and speculation. Few Western jornalists know the mind thought and history of the various factions.

After spending 12 months covering the Orange Revolution 2004, interviewing some 400 people, it would be difficult to find a more qualified correspondent on the current issues in Ukraine, Crimea and Russia. Perhaps because of my Slavic background, at an early age I found myself studying the Soviet Union, later Glasnost and Peristroka. I studied journalism under renown professor Dwight Bentel at San Jose State University in the early 70's.

These were turbulent times at US Universities which provided a challenging time for both professors and students. We had the Viet Nam war protests, Civil Rights protests, Enviromentel protests, and Women's Rights, This was a good foundation to understanding things to come later in life.

Because of my personal interest in East Europe, it has become a passion for me to study their issues, cultures and language. I felt the only way to become a pro at understanding the politics was to move there, with the people. To talk to people of all backgrounds. To see and feel what  they do. I am not a cubicle writer. I write often form the street.

Things were not only a bed of roses. I have been detained in Moscow for 48 hours. While in Kiev, two agents came to my door to check my papers. Nevertheless,I was the only Western Journalist to spend nights in tent city during the Orange Revolution, and the only Western Journalist who was invited to the Orange Revolution tent city victory dinner. I have spent lengthy times in Crimea, one of my beloved vacation spots. I have traveled throughout Ukraine staying in many cities including Sumy, Kharkiv, Dnipropetrovsk, Luganstk, Donestk, Mariopol,

Poltova, Vinnitsa, Odessa, Rivne, Lviv and of course Kyiv. In Crimea I have stayed weeks in Yalta, Svestopal, Alushta, Balaclava, Simferopal, and Alupka.

Send me an email to discuss what I can bring to you.

Writing about Russia and